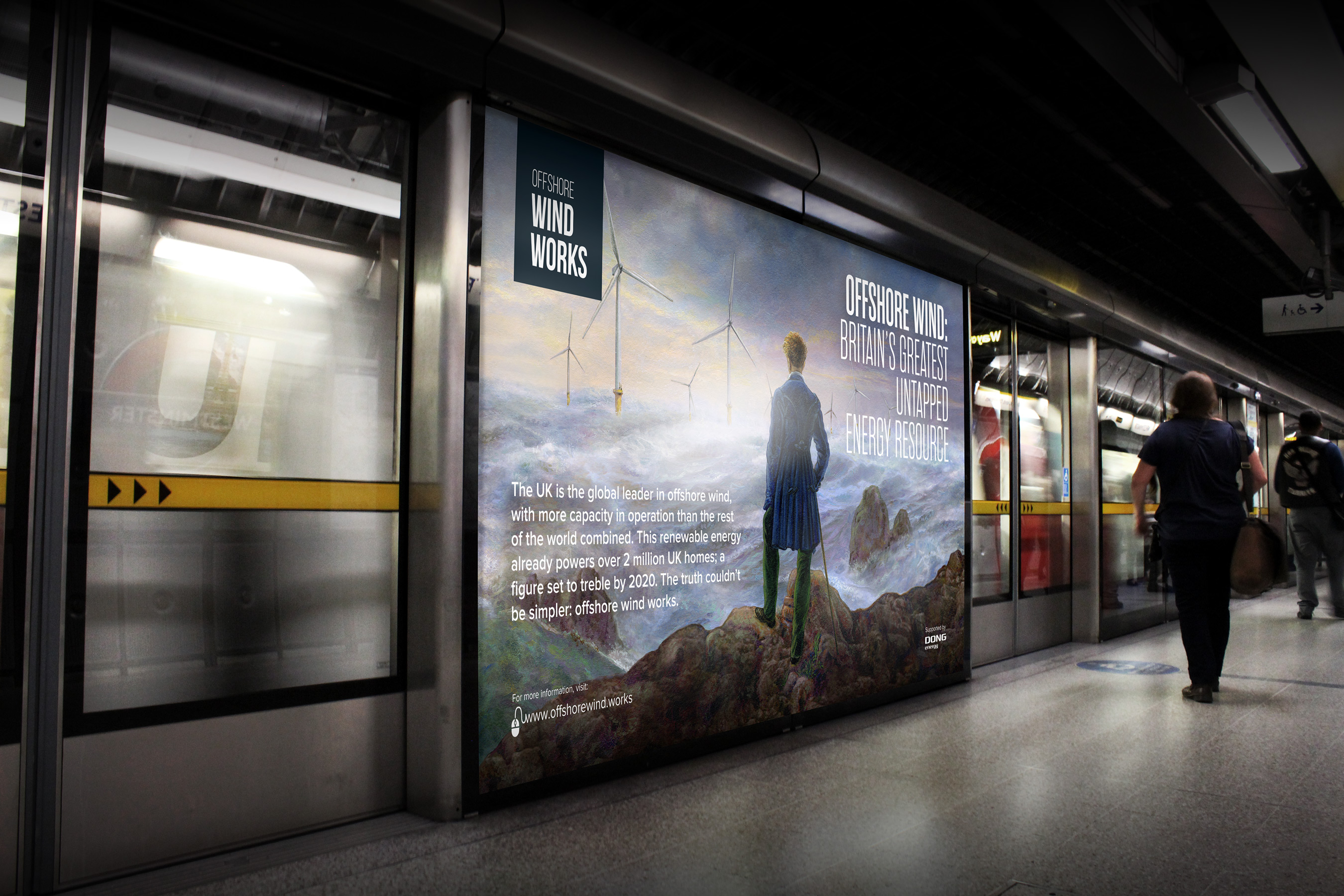 Shifting public consensus on Offshore Wind and building brand awareness across the UK.

Ørsted is a multinational Danish company and a world leader in offshore wind power construction and generation. Headquartered in Denmark, Ørsted employs 5,600 people, including over 900 in the UK. In 2017, the group's revenue was DKK 59.5 billion (EUR 8.0 billion). Offshore wind is often shrouded in myths and misfacts. Ørsted UK commissioned Firedog to create a nationwide campaign that would inform public opinion and promote offshore wind. Our inputs included positioning and strategy, renewables branding development, print and digital advertising, website design and build, content creation, social media marketing and video creation.

A multitude of themes arise when discussing offshore wind. Through extensive internal stakeholder strategic workshops combined with nationwide external research, we extracted those themes that would most effectively target the thinking British public. As an outcome of the research process, we decided that the campaign should capitalise on a sense of British pride and awe. It would combine our rich pioneering heritage with our engineering excellence. We adapted Caspar David Friedrich’s key Romantic painting, “Wanderer above the Sea of Fog,” and created a seascape dotted with wind turbines.

Our homage to Caspar David Friedrich featuring a seascape dotted with wind turbines. 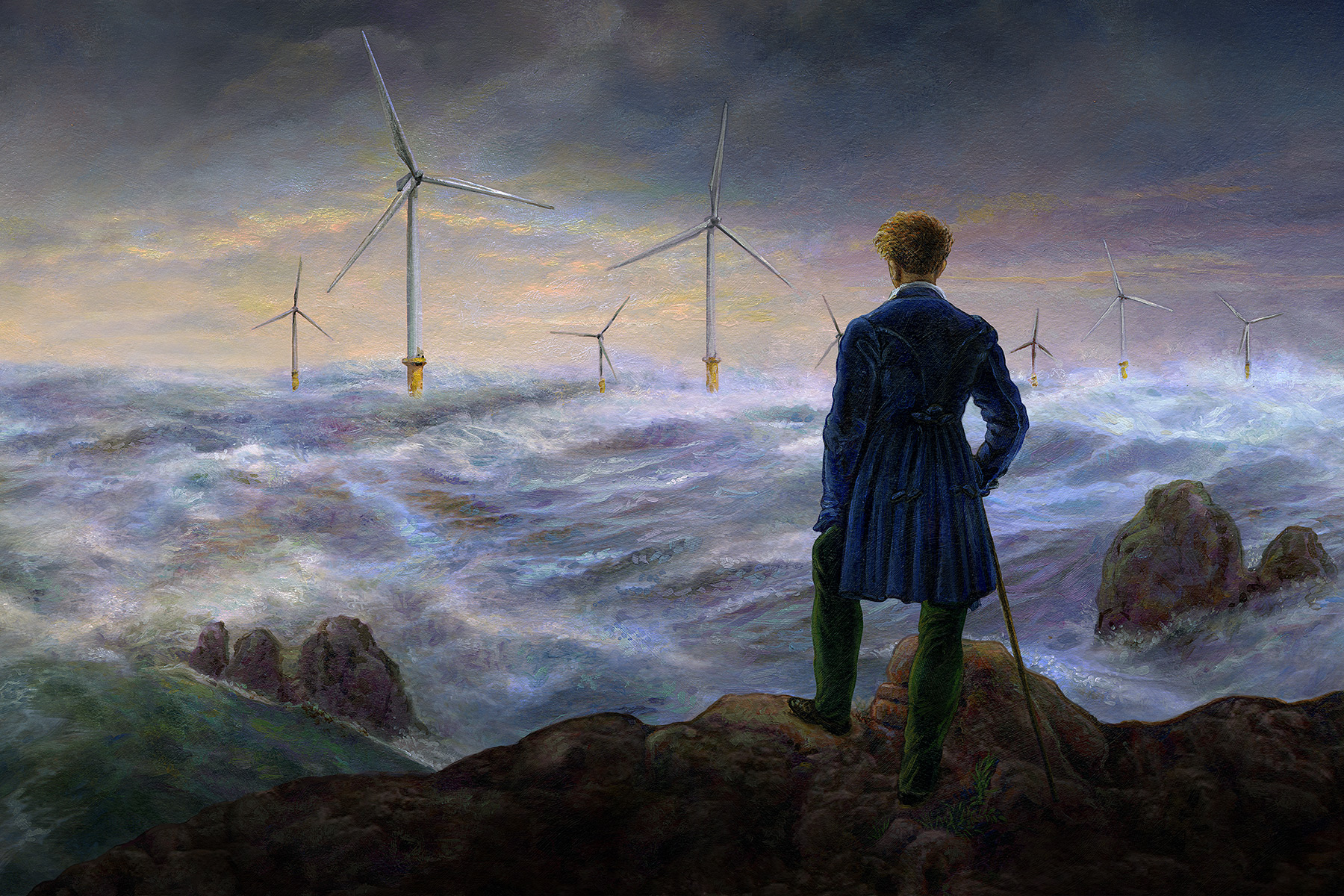 The campaign kicked off with installations across 230 sites on the London Underground.

Presenting the turbines as integral to the natural landscape aims to combat an aversion to change. As Friedrich’s painting epitomises the Romantic fascination with feelings of awe, our campaign presents the turbines as objects of wonder. The copy strategically aligns with this sense of power and innovation. The campaign extended across national and localised press, over 230 sites on the London underground and featured an extensive campaign microsite for further research and reading. In addition, a tactical emphasis was placed on Westminster station with political influence in mind. 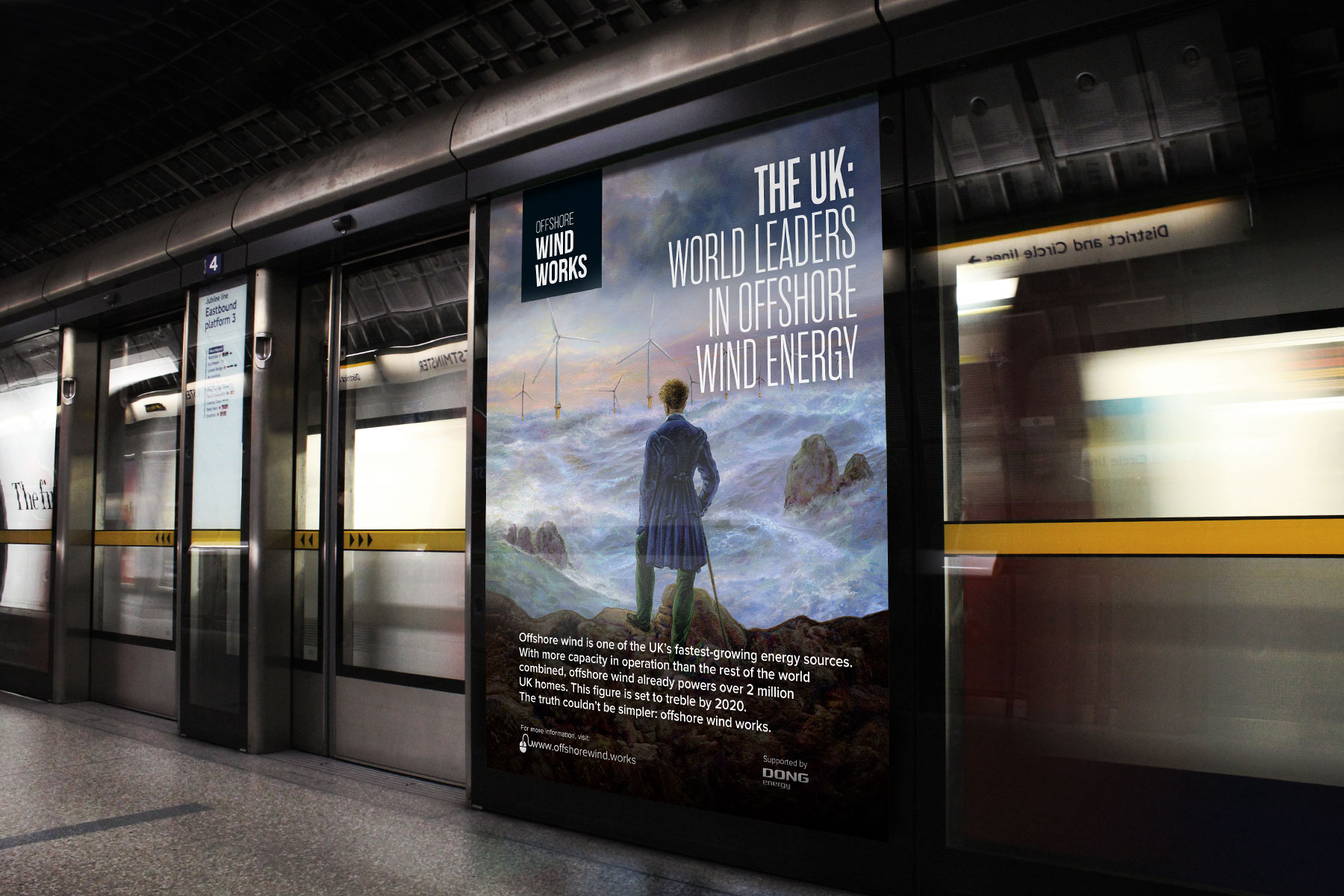 The resulting visual, inspired by Caspar David Friedrich’s key Romantic painting, “Wanderer above the Sea of Fog,” takes the audience back to a period of great romance and nostalgia. It then superimposes modern wind turbines as if it were a Brunelian dream of the future yet to unfold.

The microsite had to work hard alongside the campaign, fostering content and thought leadership. It addresses each theme in greater depth and seeks to target a wide audience through a range of interactive and informative content. In the first month alone, the microsite received 11.3 thousand unique users. Prominent political figures championed the campaign during Party conferences and following targeted Westminster publicity. The campaign was extended the following year with another blast in national press and ambient media. Again the microsite was extended with a snappy “ask the experts” twitter campaign, which extended into video content of interviews and debates with leaders within the wind sector. 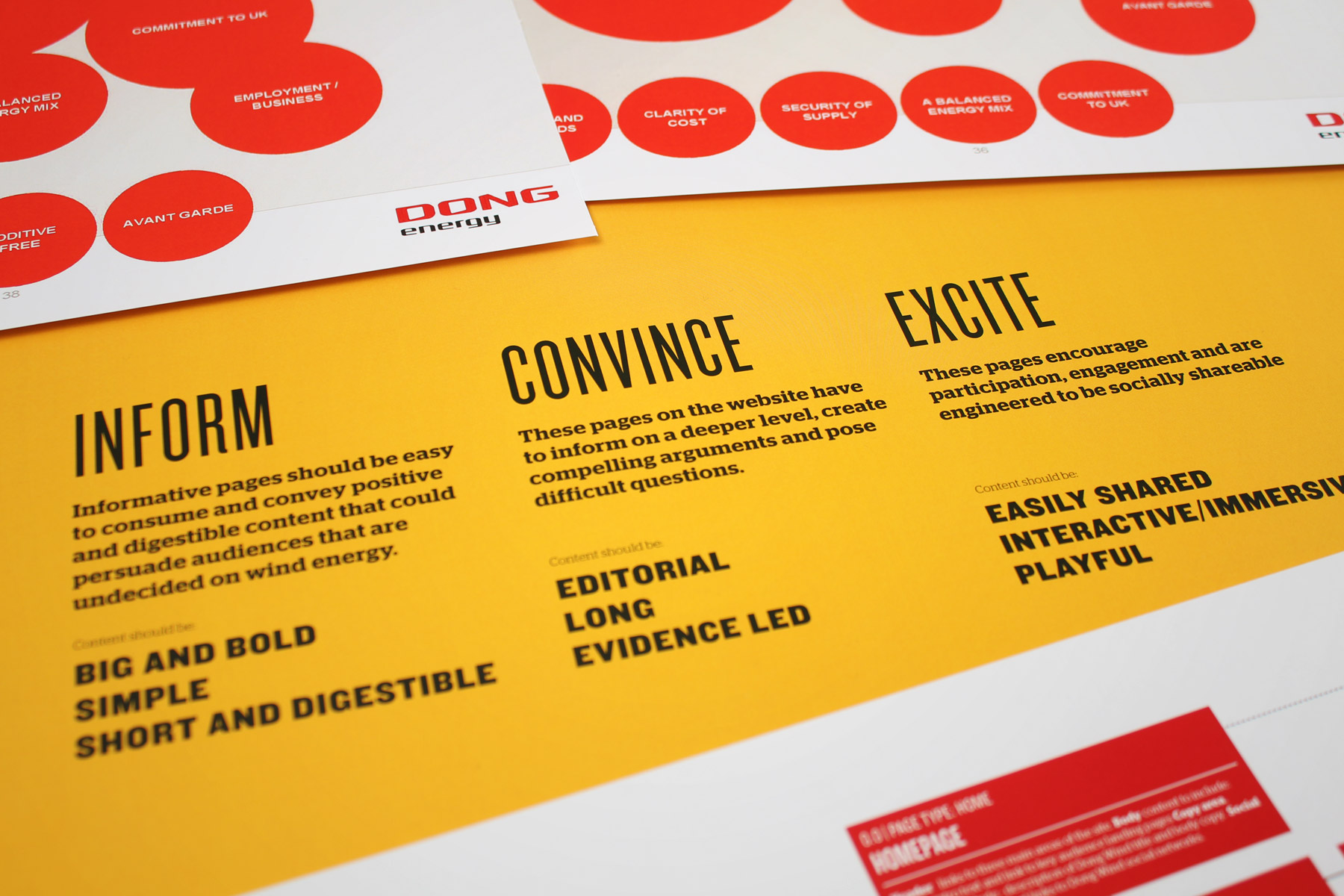 We decided that all digital content fell within one of three categories: Inform, Convince or Excite. These themes focused content towards audiences who had specific content behaviours. For example, evidence-led editorial appealed to sceptics; dynamic gamification for young audiences.
The campaign was hugely successful, generating huge interest in social networks as well as direct traffic from ad campaigns in the press and outdoor. We found that digital advertising through the Google Display Network was particularly successful. 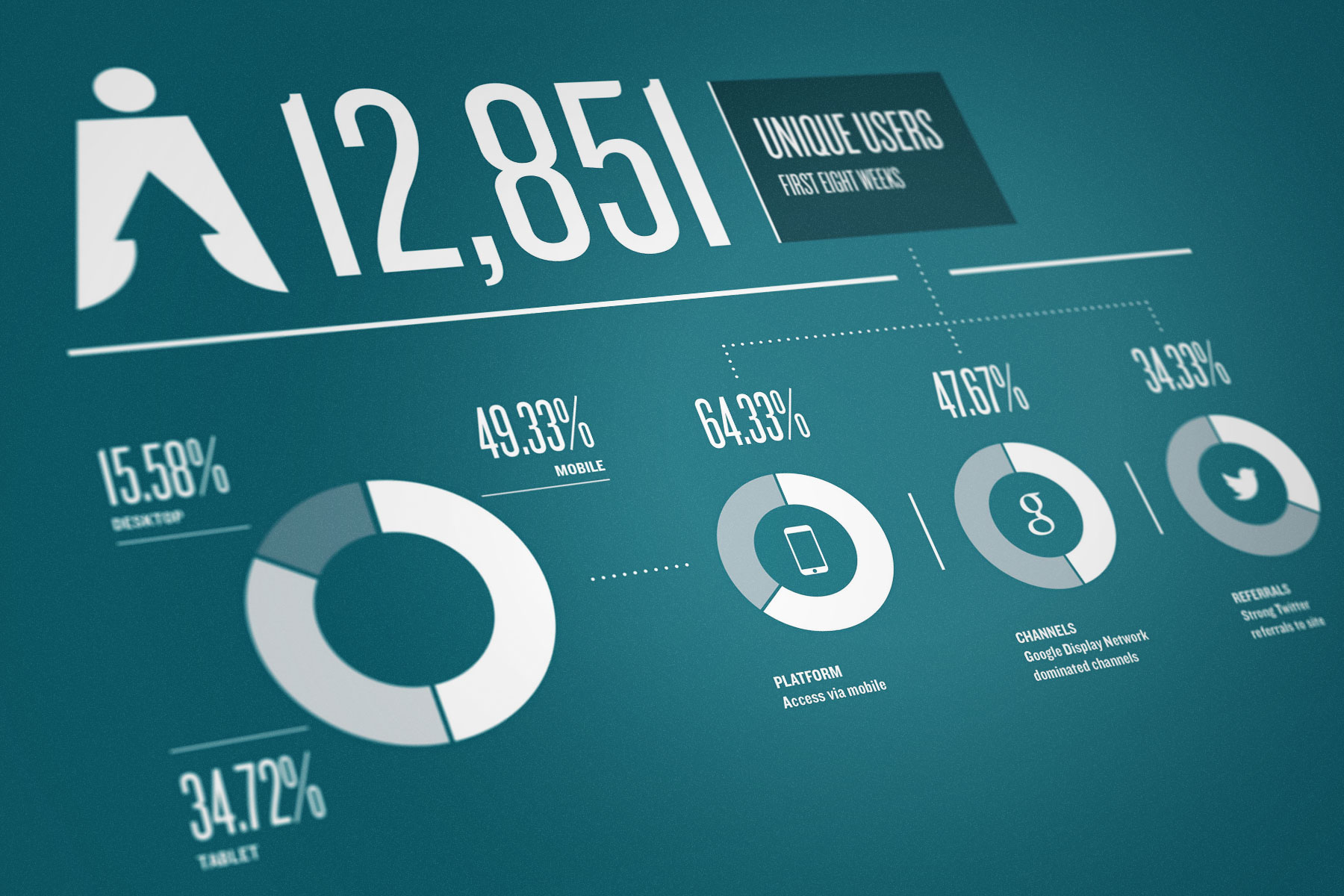 Rebrand and positioning for DONG Energy for Business

Before Ørsted, the business was known as DONG which is an acronym for Danish Oil and Natural Gas. DONG UK’s subsidiary group, DONG Energy for Business, wanted to develop an enhanced brand strategy. The tactical marketing plan would target its key audiences; in particular the industrial and commercial markets. DONG Energy acquired Shell Gas Direct in 2012. Despite impressive growth, its gas sales business (DONG Energy Sales) was relatively unknown in the UK I&C market. To align with the business marketplace and target the right customers, we renamed the brand “DONG Energy for Business.” This decision was informed by extensive research with an SEO agency, which revealed that target clients’ search terminology focused on business-related terms. 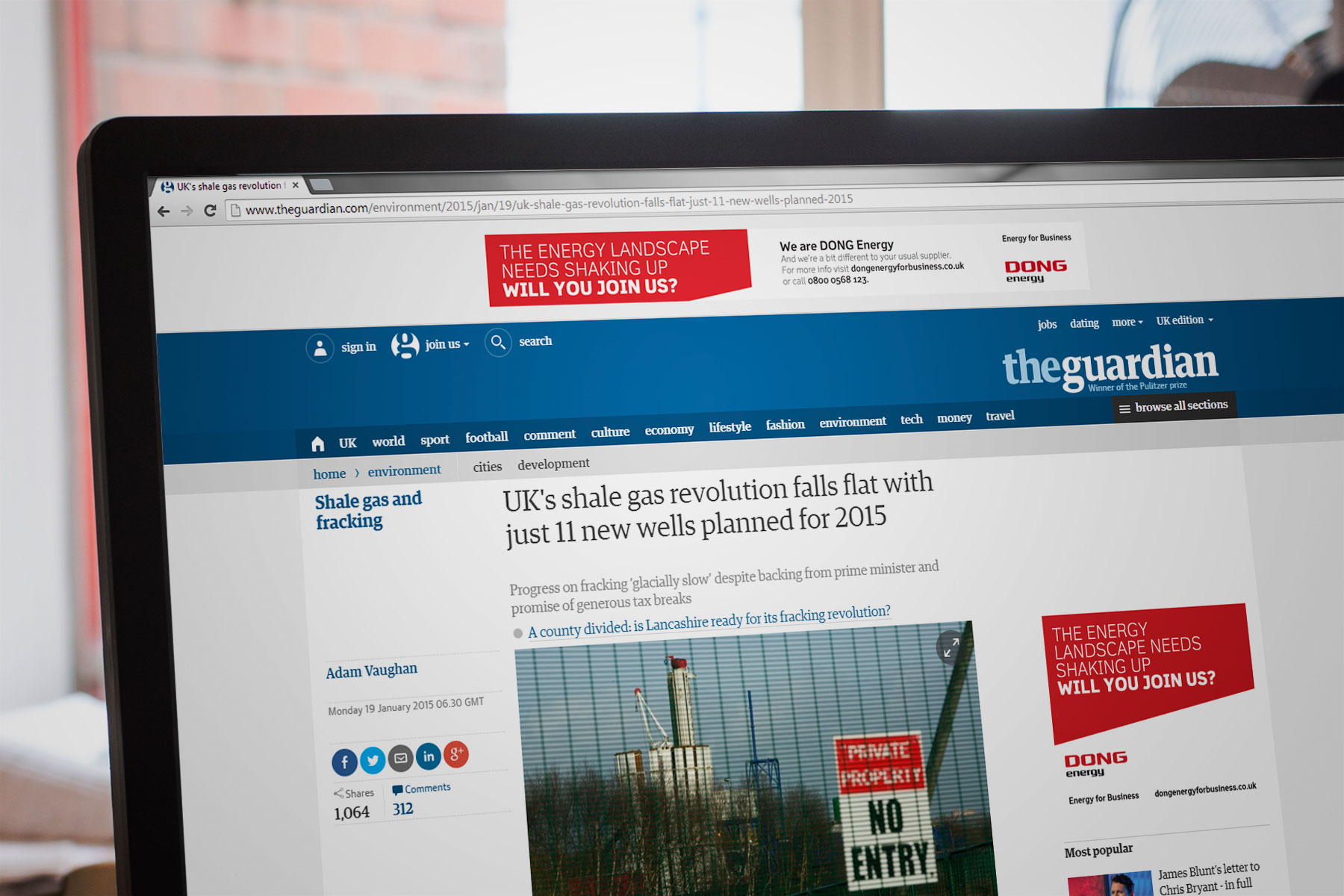 In online spaces, the combination of strong, concise copywriting and bold red colour positions DONG Energy for Business as a memorable and unique brand.